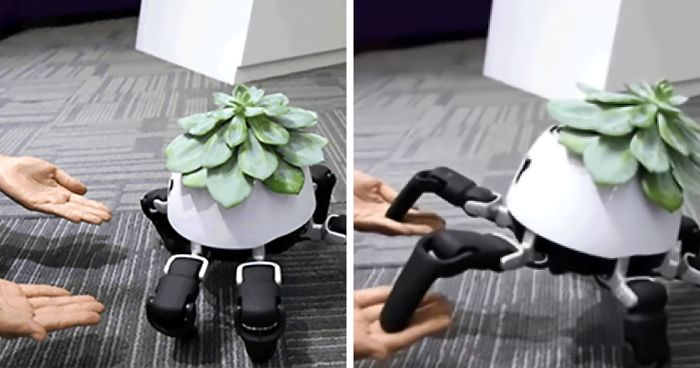 Never Let Your Plant Lose Sunlight With This Modified HEXA Robot – One of the most common mistakes in planting is not giving the plant enough sunlight. Indeed, sunlight can be an issue especially if you don’t have a spot with good light-coverage at home. But what if you can get a robot that naturally brings your plant to the sunlight it needs?
• The Inspiration
This project is actually a remake from a succulent robot project Hakuhou. Tanqi, a staff of Vincross, made it back in 2014. The prior project was inspired by a sight Tanqi saw in an exhibition in the same year – a dead sunflower that was grown in the shadows of other sunflowers.
Thinking how the sunflower could have survived as long as it can move out from the shadows, the project was made as an effort on “Sharing Human Technology With Plants”. Both projects was meant to give plants the ‘experience’ moving around like animals, which is the reason why the robots are not simply chasing around sunlight but also given certain personalities. It reminds us on those virtual character in online games in https://homebet88.online.

• How Does It Work?
If you see the original HEXA model on Vincross’ website, you’ll see right away that this project is basically an improvement of that model. The original model is already designed for interactive relationships. Besides taking pictures, dancing, and exploring around with its six legs, HEXA can also learn movements from their human ‘mentor’. Yes, Vincross called their HEXA patron as human mentors, as they gave the units the ability to learn unique movements or new skills only with the help of humans. Think that model, then added with several other basic sensors such as moisture, shade, and light to accommodate the plant’s needs.

• More Than Just A Pot
Thanks to the additional sensors, the HEXA model became more than just expensive, fancy pot. After planting the plant of choice inside the space on top and setting up the movements, the model will roam around the house freely. Depending on the plant’s needs, the robot will walk into the sunlight and step out of it when needed. It can also dance to express emotion – so far, only two dances are embedded in the program to tell human owners that the plant is upset (because they are getting thirsty) or happy (because they got enough water). You can also play with it as you would to pets.
With this modified HEXA, you don’t have to move the pots around every time the sun moves on its course. Not to mention, it is interactive and expresses emotion related to the plant’s needs. So, instead of a fancy pot, you’ll get a pet plant instead!