The Cheetah 3 has been known so well as one of the best robots created by Massachusetts Institute of Technology (MIT), Boston, United States. This particular robot, which has been designed with four legs, has so many abilities to show to you, which can be like mid sprint, hop hurdles, and so on. So, it is actually no wonder it could impress so many people when it got introduce to the public for the first time. Furthermore, it can also offer you the awesome improvements that will amaze you for sure. Fortunately, you can find out those improvements below.

Well, one of the amazing improvements of the Cheetah 3 by MIT is that it can navigate so well and effectively when it is completely blind. It is all because it is created to be able to feel the environment around instead of using sensors system or camera. So then, the robot will be able to move even when it is on the unpredictable place. Then, the movement of the robot is something that you can ignore. It can show you the better movement by letting the legs shove and pull stably. So, it will never fall so easily while exploring its environment. Moreover, the leaping ability is the most highlighted improvement applied on the robot. In the other words, it can rear back using its legs to jump in the air quite higher than its previous model can do. Not only that, it can also make an excellent landing with no problem at all.

In addition, the Cheetah 3 apparently needs some upgrades on its visual still. It will be a very nice idea to complement the with the more interesting appearance. By doing so, you will see that the robot will have not only splendid capabilities, but also fabulous aesthetic aspects. Thus, it can be the more remarkable and wonderful robot in the future. 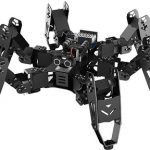